Google Glass are AR smartglasses developed by Google Inc. It is a standalone device that needs to be connected to other devices running Google’s Android OS, mainly smartphones. It uses a small display hovering in front of the user’s left or right eye. The user can control the device either by a small touch-pad on the side of the device or by using voice commands. The label glasses here could be misleading, by default Glass does not come paired with any lenses, the device itself is a slim glasses-like frame with the HUD unit attached to it. So far only a group of early-adopters selected by Google called ‘Glass Explorers’ could test out the device after paying 1500 USD for the developer version of it. After this testing phase, Google halted the sales of Glass, saying that it will take some time to perfect it.[2][3][4] Thanks to a big marketing campaign, Google Glass created a number of controversies, see below for more details.

Thanks to the hype Google created, smartglasses and other HMDs, experience a boom that has not been seen before. Even if Google Glass discontinued the device for now, the interest in the technology created a better market for such devices and this lead to many new projects being unveiled. [5] Following the discontinuation in 2015, Google shut down the associated social media accounts for Google Glass in January 2016.[6]

The device consists of a titanium frame of four different designs[7], nose-bridge and an attached 640x360 pixels prism projector piece which also contains the processing unit and a 12GB memory that can be expanded by Google cloud storage. Google describes the projection as the “the equivalent of a 25 inch high definition screen from eight feet away.”[4] Other notable features are a 5 Mpx camera, microphone, accelerometer, gyroscope, magnetometer, GPS, touch-pad and a 570mAh battery. Glass runs Google’s Android operating system and can connect to other Android, iOS or Bluetooth devices, or the Internet via Wi-Fi, Bluetooth or microUSB connection. Sound feedback is conveyed through an oval speaker on the inside of the battery pod or via attachable ear buds. [4][8]

The usability of Glass can be further expanded by using additional software called ‘Glassware.’ These apps as well as the general settings, contacts and otherwise the main hub of the device, is called MyGlass, and can be downloaded as an app for Android or iOS.[9]

User can control the device by a touch-pad located at the side of the device’s frame, with voice commands, or by moving their head.[10]

The first rumour about a new device coming from Google started circulating the web around the end of the 2011.[11] Google hired electronic engineers from Nokia and Apple and was said to be working on a brand new piece of wearable technology.[12] The device was teased on social networks starting 2012. This culminated on Google I/O in April 2012, when Glass was officially announced by Sergey Brin. The mentioned ‘Explorers’ program started in May 2013. Google Glass Explorer program was a testing phase for which potential testers could apply by using a hashtag #IfIHadGlass. Google then selected 8000 individuals who were invited to United States to pick up their device which was followed by training on how to use it.[13] The program and subsequent sales of the device were halted in January 2015.[14] Google announced that the project is not abandoned but that Glass needed to be redesigned and will not be fully released until it is perfected.[15][16] 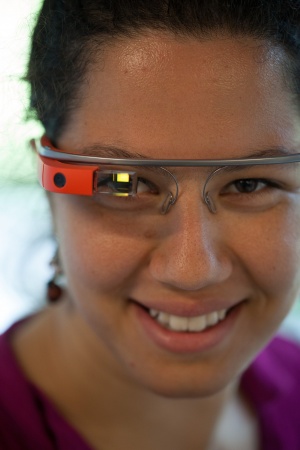 A woman with Google Glass on.

Google Glass is a HMD device that offers a hands-free way of searching, browsing or otherwise using the Internet, record video and take pictures, and thanks to the expandability with custom apps, use these features for entertainment, education or therapy.

Google Glass can be used to record everything its user is looking at. This raised a notable controversy as it could mean the intrusion of privacy if the wearer decides to record strangers without their prior consent.

A face-recognition app could be used to identify people by just pointing the device’s camera at them. This further violates personal privacy.

As much as other pieces of modern technology, Google Glass can be distracting to the user, effectively isolating him from his surroundings. This raised concerns whether the device should be allowed whilst driving.[20]

These controversies caused the creations of reactionary movements for and against the device alike. The “Stop The Cyborgs” campaign calls for limits on in which situations Glass can be use and to encourage people to think about the impact of new technologies.[21] While Sergey Brin, the co-founder of Google Inc., defends the device as something that is actually meant to free the user from distractions that smartphones bring.[22] A woman claims to be assaulted in a San Francisco bar while wearing the device.[23] The word glasshole was created to describe people that act unethically or abusive while using/wearing the device.[24] There is even an ‘Etiquette Guide’ for a Google Glass wearer.[25]

Concerns regarding advertising come to mind as well. Google’s revenue is created mostly from advertisement. There might be the possibility for Google, or any other advertisement company, to place virtual adverts into what the users see through the smartglasses.[2]

Google Glass may create some eye strain to the user. The fact actually raised a bit of a controversy when Google’s optometrist consultant doctor Eli Peli shared his experience with Glass, stating that it can cause eye-aches because the display is positioned in an area that is uncomfortable to look at for prolonged periods of time and requires days to adjust to.[26] He later retracted his statement, saying that the device does not pose any serious health risks and that the eye-strain is comparable to other devices with similar display technology.[27]

Eye-strain can be an issue with display-equipped devices and this is even more so prevalent in technology such as Google Glass because the displays are very close to the eyes. Similar health concerns connected to other devices were not reported, however.

Enhancement and therapy. Google Glass offers several useful applications that makes it easier to use the connected smartphone. It can also be used therapeutically because the user can install additional applications that could offer such features.

However, Lisa Goldstein, a deaf American journalist, writes about her negative experience with Google Glass.[28] As a person with hearing aids and a deaf accent, she was unable to get a response from Google regarding the usability of Glass for people with such disadvantages. The device is bulky around the ears and it may be uncomfortable to wear hearing aids with it at the same time. Her concern about electromagnetic interference influencing her hearing aids was also not addressed.

Goldstein’s experience undermines the usability of Google Glass as a form of treatment (in case of people with hearing impairment) in its current form. The requested features, however, could be expanded by additional applications, e.g. the Captioning app for real-time captioning[29] can be useful to people with a hearing impairment. Visually impaired people can use Glass with an app to help them recognize items they are looking at. They hold the item in front of the camera, say a command, and a custom made app attempts to recognize what is written on the item and describes it to the user.[30]

Another case in which Google Glass acted as a form of treatment, is the ability of the Glass to recognize faces, and with an app that expands this feature, to understand and describe facial expressions or track user’s attention.[31] This can help users with autism and related disorders to better orient themselves in social situations better.[32] 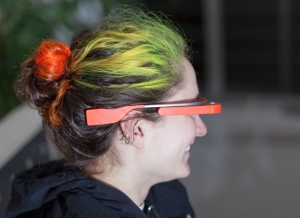 A side view on Google Glass.

Google's aim was not to advertise Google Glass until it was perfected at first. The device was meant to be tested in secrecy, non-involved Google employees did not know about the project, and unveiled only after it was deemed completely finished. When Sergey Brin, the co-founder of Google, joined in on the project, the decision to develop Glass was changed. The still work-in-progress project was unveiled to public and Google begun recruiting testers to its Glass Explorers program.[16]

Despite Glass being an unfinished, prototype-stage device, Google, and most notably Sergey Brin himself, announced the project officially on their Google I/O keynote in 2012 in a very spectacular way. The show involved skydiving, rappelling down the conference building and then finally cycling to the stage. All this was being broadcasted to the conference room from Google Glass cameras that the athletes wore.[33] This flamboyant unveiling and the added exclusivity of the Explorers Program combined into immense hype throughout the media.[34]

The enthusiasm did not last long, however. Reviewers quickly realized they were describing a device that was hastily released and that is still in early stages of its development. Google Glass was praised for being lightweight and ready to record anything by just giving it the right command. TIME selected Google Glass as one of the best inventions of 2012.[35]

The negative aspects outweigh the positive ones, though. The reviewers criticise Glass for having a short battery life and that the device is, in fact, just a small display hovering in the corner of the user’s field of vision. The device was met with disappointment. Thanks to the hype, many expected a revolutionary piece of technology but Google sent out an unfinished device whose faults were quickly discovered upon closer inspection.[36][37][38][39][40] As an example of such issues, we can mention the tendency of the display prism to break in the heat of the day and form small bubbles on its surface. This was quickly addressed by Google, and faulty devices were replaced.[41]

The introduction of Google Glass had a notable impact on pop-culture as well. It was featured on The Simpsons[42], popular talk shows made fun of it[43], celebrities wore it.[44] Glass was simply popular. And despite the obvious flaws due to it being only partially-finished device, the hype shifted the focus of the media and public to smartglasses and inspired others to start their own AR projects.[45]

Apart from hardware and features of the device, what was discussed the most in the media were privacy issues. Many finds the ability of a Google Glass user to discreetly record everything intrusive.[46] (For more, see Ethical Issues above.)

Google Glass may be illegal according to Ukrainian legislation that prohibits the sale and use of ‘spy’ devices that can secretly record the surroundings.[47]

Several establishments, notably casinos and movie theatres, pre-emptively prohibited the entry of users wearing Google Glass because they are concerned with privacy of other patrons[48], they comply with the local law or because of copyrights concerns.[49][50][51]