Quell is wearable device developed in purpose to provide palliative treatment for people suffering from chronical pain. Quell is commercially available, thus customers don't need any prescription from a doctor. In present, it is the only palliative wearable, which is approved by FDA to be used during sleep. Quell wearable is presented by two technological improvements, which is OptiTherapy™ electrode and transcutaneous electrical nerve stimulation (TENS), method allowing sending electrical pulses into afferent nerves through the skin. The technologie of TENS is not new, but it was developed on knowledge about possibility to heal with electricity, which was described already in 18th century.[4] Quell device was constructed in the beginning of 21th century, on the basis of knowledge about TENS.[5] its technology, marketing strategies and usefulness, regarding human enhancement and therapy. A) A therapy pod, B) An electrode array, C) A Band, D) An example of usage on upper calf, place of effect[5]

Regardless which part of body is in pain, Quell is always placed on upper calf (no matter which side). The reason is that there is better contact with nerves, on which are impulses sent to part of brainstem. After the devices is fastened around the calf, user needs only to press the button on it. The starter kit has inbuilt accelerometer which allows calibration of electrical intensity according to user's body, manually regulating is not needed.

For easier control it is possible to download Quell application for iOS[9] or Android[10]. Company offers also registration of individual user's device, which will allow company databasis to collect measured data about user and treatment process (this registration is optional, though).

Mechanism of the treatment lies in the following process: in electrode that stimulates clusters of afferent senzoric nerves and this triggers inhibition of pain in brainstem. Inhibition comes up due to cascade neurotransmitter release. This descending process starts in periaqueductal gray matter, continuing to medulla and then into spinal cord (its dorsal horn).[11] Within-body-produced opioids, enkephalins, causes inhibition of pain signal transmission, while activate δ-opioid receptors. The described process is the core of reason why it is cleared as 100% drug free. More detailed description regarding TENS technology (not Quell in particular) is available in Johnson's book Transcutaneous Electrical Nerve Stimulation.[4]

Company also claims, that Quell is as twice stronger as previous TENS pain relieving products, thus it doesn't have to be used locally, but only on an upper calf.[12] 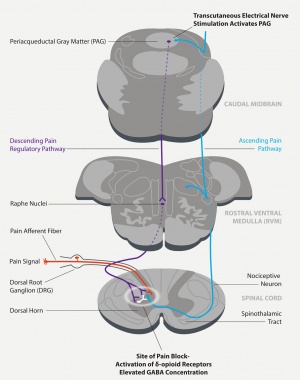 Official webpage depictures the process of how pain is blocked in medulla.[13]

Neurometrix is company directed on developing health-care wearable technology with main effort on sleep disorders, chronical pain, and nerve deseases treatment. The company, having a seat in Waltham Massachusetts, was founded in 1996 as a spinoff of the Harvard-MIT partition of Health Sciences and Technology.[14][15]

Important dates in history of TENS:

In present, there are no ethical issues known. Quell device's purpose is to provide lenitive care (and also it is FDA cleared). The device may help people from pain of unknown cause, and unkown way of treatment. This can be considered as positive ethical value.

Also no modification of human body is included except of enkephalins'stimulation, and any long-term consequences in human organism are not known.

Official statement from Neurometrix about side effects is that there are none[1]. Usage is 100% drug free, with clearance by FDA (Food and Drug Administration) received in 2014.[17] No side effects mentioned are mentioned. There are some contradictions that patients with cardiac pacemakers or with implanted defibrillator should not use Quell, neither people with implated metallic or electronic devices.[18] Patient is supposed to consult the using with a doctor. Despite the mentioned contradictions, Quell company says they have customers who have pacemakers and use the device succesfully (See picture). 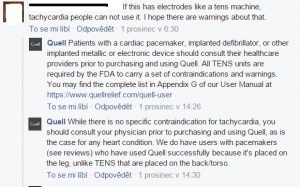 Quell's responses to the user's question, whether the device is contradicting to tachycardia. https://www.facebook.com/quellrelief/?fref=ts, December 1, 2015

On the other hand no medication doesn't restrict Quell-using.[19]

However, there are another information sources which discuss TENS technology. For example they claim, that TENS method is surely inexpensive and safe, but there are risk with using electrodes on damaged skin, or over area of malignancy,[20] or it could trigger a seizure in epileptic patient in case that electrodes will be put near patient's head or neck.[21] Regarding these risks, most of them patients may avoid as Quell is used only on an upper calf. Nevertheless we should wait for some new quality scientific trials and longe to show if Quell device brings some currently unknown specific healthy risks.

Speculatively, it might happen that palliative treatment will lead only to pain elimination but not causation cure, which could cause some grave injury. Let's consider, in a case of scoliosis, some physical workout could help to strenghten the back muscles and thus to stop a back pain. Pacients with any continual body-pain should take in consideration if there are any ways to cure cause of pain first. This discussion is based on some videos and comments of people using Quell just on scoliosis.[22]

Quell wearable device has primarily therapeutical function. Company states it was developed on purpose to palliate chronical pain which basically has origin in these four diseases:

Although Quell was not created primarily to enhance cognitive or physical condition in humans, it may have secondary impact on physical and mental health (e.g. emotional stability, better memory) due to stress release, better sleep periods, and ability to be more concentrated if pain disappears. As a result may be quality of life enhanced generally.

Regarding business interests in presenting this product in public, and the fact that internet is anonymous space where we have no clue who is author of opinions or arguments, readers should consider that information found may be false or may be results of so called trolling. This concerns especially risks of possible health risks being hidden by promotion companies and institutions, further it could be individual people who could be paid for competitive malignment, or otherwise people praising a product untruthfully, or there may be people who just want to troll and thwart other project.

Products of Neurometrix are presented on the official Neurometrix websites, and also each of them has its own webpage. It is question to which extent can be this website trustworthy or customer-friendly, regarding following reasons. It is untransparency of information: It takes longer time to find technical parameters or principles of mechanisms and useful information. Next reason is absence of ethical aspect of Quell device. Customers will not see what does company thinks about such an issue. The last reason is that website lacks references to independent scientific studies which would criticaly evaluate the device's mechanism.

There is also official launch video available on the Quell product website. In 2014, Quell official facebook page has been launched, and it's still active. Also its administrators shows some will to answer on users' questions and to share new information with them. Quell has also its own youtube channel, however, it contains only one video and otherwise this channel seems to be currently not active. 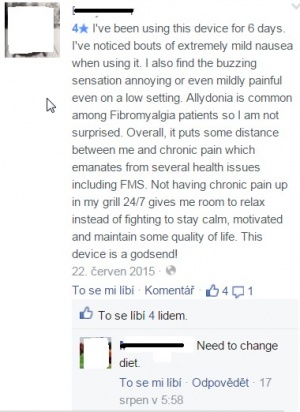 Customer is satisfied with the Quell device, but claims that pain relief is not complete.[24]

Customer is unsatisfied with Quell, although his disorder is one of those that can be treaten by Quell. [25]

There are some unofficial pages discussing Quell relief in point of view of business, technology, or healthcare. In their articles, it seems they use promotional rhetoric, without mentioning no scientificaly verified information. For example here in the article "Wearable of the Week: Quell Drug-Free Pain Relief Wearable" on Humavox).

Many advertising videos and testimonials are to be found on youtube. Here are some examples of them:

The internet medical journal MedGadget has released an independent review of Quell:

MedGadget's conclusion is that "We unfortunately failed to find significant pain relief after using this $250 device for a few weeks, but much more testing is needed before we can come to a definite conclusion."[26] However, MedGadget does not provide any specific data to support their claims about the disadvantages.

Besides another official presentation, many individual users share their experiences with the device on their blogs or Facebook posts, comments, ratings etc. Blog-contributors describe using Quell mostly as positive experience. People are not satisfied with are unincluded insurance, hardly avalailable information, or expensive electrode which needs to be changed more than it is officially stated and other inconsistencies. For example user claims "...the replacement electrodes cost $30 for 2 ($15 each) and each one is supposed to last 2 weeks, however, I used my first one for exactly 4 weeks before it stopped working as well."[27]

Individual user's manual- or testimony-like videos can be found as well. There the user confess no affiliation with the company: Quell Wearable Pain Relief For Sciatica Review And Walkthrough, 7. 7. 2015

Only health issue found was nausea, although pacient claimed pain reduction (see picture below) - this claim is actually the only one which neither Quell site, nor dr. Shai Gozani has responded to. However, there's no evidence if it is really side-effect of Quell usage.

People also comment intensity of pain reduction. Results may vary from fully satisfying treatment over partial improvement to no advances in pain relief at all. (see pictures from the youtube chat[28])

Below are examples of various blogs with articles dealing with Quell:

Quell received clearance from Food and Drug Administration, that is federal agency as part of Department of Health and Human Services in the USA. Quell is kept under regulation number: 882.5890, and it is identified as "A transcutaneous electrical nerve stimulator for pain relief is a device used to apply an electrical current to electrodes on a patient's skin to treat pain".[29] Further, it is classified with a "Class II (performance standards)".[29] The latter category features most of medical devices (FDA stated 43%), including e. g. wheelchairs or pregnancy test kits.[30]

Neurometrix says they use so called Wearable Intensive Nerve Stimulation (WINS),[31] however, no studies are provided to explain its mechanisms.

There is only one paper about Quell principles right on the official Quell website,[5] but this doesn't contain necessities of independent scientific study. Although there are no other studies dealing with Quell product specifically, an independent research about transcutaneous electric nervous stimulation (TENS) was conducted. This study appear not to be unambiguous regarding good efficacy of TENS in treatment. Here follow few works engaged in TENS technology and its influence on different deseases.

Sluka and Walsh[23] summarize existing researches of TENS, and shows couple of results of scientific trials, and speak about equivocal effectiveness remaining due to low number of randomized and controlled trials. Sluka and Walsh quote that different trials for one disease may have contrasting results, as in case with treating labor pain.[23]

Mark I. Johnson is author of a book supporting TENS technology.[4]