Romet R is a series of electrolarynxes developed by an American company Romet Inc. The series consists of four devices: R120, R210, R310, and R440 ECHO. As of February 2016, all four models are available for purchase. The overall appearance between the individual models differ only marginally. The devices are roughly palm-sized and shaped as a barrel. The control features are present on the body of the devices. The material the devices are made of plastics with soft outside cover more comfortable handling. Each is powered by a one 9V rechargeable lithium-ion battery. All the models have an adjustable head, that allows for finer tuning of the produced sound.[1]

The individual differences between the devices are discussed below:

R120 - This is the most basic model of the series. It has a plastic barrel and features a basic on and off setting button. The user has no control over the volume or pitch of the artificial voice. 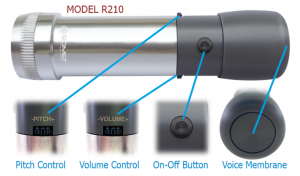 R210 - This model replaces the R120. It's body is made from polished aluminium and the device features on and off switch as well as two sliders that allow the user to control the volume and the pitch of the produced voice. 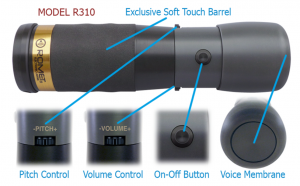 R310 - This model features a nonslip coating of the device's barrel. It is otherwise identical to R210. 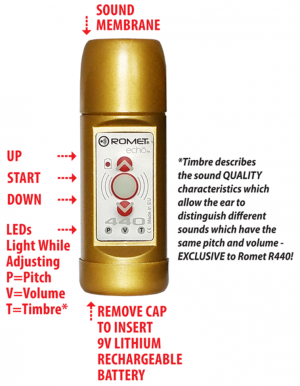 R440 ECHO - This is the most recent, and the smallest, model the company produces. Additionally to features inherited from the previous models, the R440 also allows for adjusting the timbre of the voice. All these setting are now programmable and can be saved as different pre-sets. 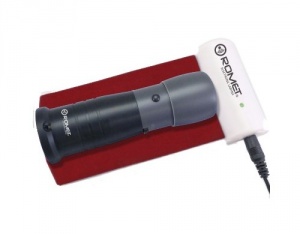 R355CP - A discontinued model that featured an accumulator instead of a 9 V battery. The device is recharged wirelessly via the included charging pad. It is not featured on Romet's official website but it can still be purchased from a third-party.[2]

All models come with an additional rechargeable battery and a battery charger that are sold together with the devices.

The series of devices is directed towards laryngectomy patients that lost their ability to produce speech. The usage of an electrolarynxs allows the to communicate in a quick and natural manner without resorting to other means such as pen and paper.

Romet Inc. is an American biotechnology company headquartered in San Antonio, Texas. The company was established in 1979 and sells it's devices internationally.[3][4]

Treatment - Electrolarynxes are meant to return the ability to communicate by voice for laryngectomy patients.

There are no ethical or health issues connected to this particular device.

There are no professional reviews about the devices available on the Internet but some user reviews on Amazon exist. A user using the nickname Amazon Costumer[5] left a handful of negative reviews about the R120, R310, and R 440 ECHO models. The user claims that he has a long experience working with laryngectomy patients and that the uses an electrolarynx himself. The review for R120 is very lengthy, spanning several paragraphs, and negative. The device is deemed too unergonomic due to the sharp on/off switch, the lack of volume and pitch control is also criticized.[6] The R310 model is again said to be badly designed, with the on/off switch too sharp to be pressed for more than a few moments and the volume and pitch controls being accessible only with difficulties.[7] Finally, the newest model R440 ECHO is, again, left with a one star rating for being too small to comfortably handle and for the fact that a potential user has to disengage the on/off switch to adjust the volume.[8] It is important to note, however, that Amazon Customer does not have his comments flagged as verified purchase by Amazon.

The only other user review that does not come from Amazon Costumer is from the users named Michael Begin and Ciera. Begin shares that he had to return the device twice because it did not work. Ciera does not give any assessment of the device itself, but praises that the purchase comes with extra batteries included.

There are a number of video testimonials and endorsements by laryngectomees available on the Romet official website.[9]

The company claims that it is registered with the U.S. Food and Drug Administration and that it complies with the European Commission Council directive 93/42/EEC.[10] It does not, however, share the FDA registration number, nor it can be found in it's database by using queries such as 'Romet', or 'Electrolarynx'.

There are no related projects or research relevant to this device specifically.

For more information about this type of devices, please see the Electrolarynx synopsis.