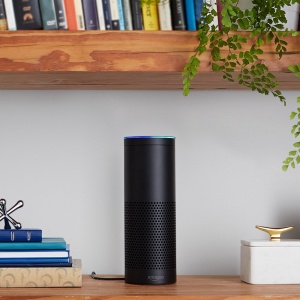 The Echo on a shelf. Note the power cable.

Amazon Echo[1] is a smart device by Amazon.com, Inc. that is controlled by a variety of voice commands and can function as a intelligent personal assistant.[2] Unlike some other personal assistants like Microsoft Cortana or Apple Siri, Amazon Echo is not designated for smartphones or desktop computer, but it is a stand-alone device for the household. Amazon announces the device on 6 November 2014.[3][4]

The user can use Amazon services, play music, ask about weather or traffic situation, control other smart devices in the household, review calendar and task, ask about recipes, and other.[5] The abilities of the device can be further expanded by third-party apps called Skills.[6]

Amazon Echo costs 180 USD[7] and was released on 23 June 2015 for the United States of America.[8] The service is not yet available outside of the US,[9] although some users outside the US report using the device without any problems.[10]

In March 2016, introduced two smaller devices with the same capabilities as Amazon Echo - the Amazon Dot, a device with smaller speaker and Bluetooth, and the Amazon Tap, a smaller, battery-powered version of Echo.[11] 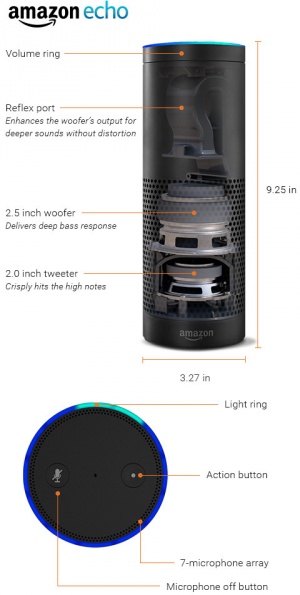 Cross-section of the device and control features. The device with the outer shell removed. The motherboard is visible on the right.

The Echo is a approximately 24 cm tall cylindrical device. The power and microphone buttons are on the top of the device. An array of seven microphones is also present here. A small part of the top rotates and can be used to adjust the volume. Almost entire housing of the device contains speakers, the control unit is embedded in the side of the inner tube. The device connects to the Internet via Wi-Fi. It is not battery-powered and thus needs to be connected to a power outlet.

The user can select from three pre-defined 'wake' words the device listens to. After the device is ready, the user can say a command in plain language. The query is parsed on the side of the device and sent to Alexa service running on Amazon servers for processing. After the command is processed and relevant information retrieved or action taken, the synthetic voice convey the results to the user. However, Amazon Echo can not process natural language in a way that more advanced Intelligent Personal Assistants can. Echo only looks for keywords in the voice commands from the users and fails at longer and more complicated sentences.[12]

Additionally to it's personal assistant functions, Amazon Echo can also be used to control other compatible household appliances such as the smart lighbulbs from Philips or Belkin, or the smart WeMo coffee maker.[13]

Echo's abilities can be expanded by using 'Skills', third-party plug-ins develop through the Alexa Skills Kit which is freely available to developers since 31 July 2015.[14]

Amazon Echo is a voice command-driven household device that the user can use to use internet services, search for information, play music, set tasks, and order items from Amazon.com.

The Echo was developed by the Amazon Lab126 based in Sunnyvale, California.[15]

Amazon.com, Inc. held an recruiting event in Seattle on February 2016 which shows a big focus on this technology.[19] As of March 2016, Amazon lists over 600 open positions for Echo.[20]

Enhancement - Smart home controllers and intelligent personal assistants enhances the user with the ability to control the devices in their home via voice commands in natural lanaguage. They also assist the user in information retrieval and the usage of internet services.