Difference between revisions of "Hexoskin"

Hexoskin is a range of fitness clothing with built-in biometric sensors. The t-shirt is equipped with heart rate, respiration and acceleration sensors that gather data about the user's sport activity. Processed data is synchronized with the provided Android or iOS app and can be interpreted to improve the user's training. The device is used by professional athletes, health researchers, and space agencies.[8][9] Hexoskin is compatible with physiological data analysis software and several researchers are using the garment in their experiments.[10] 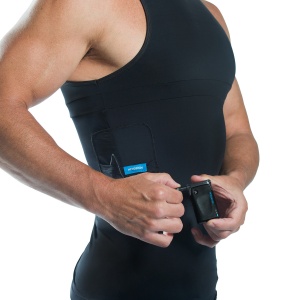 The Hexoskin shirt is a purely textile garment with the sensors woven in the fabric of the shirt. It is equipped with a range of sensors, namely heart beat, respiration, and accelerometer (cadence) sensors. All sensors feed the data into a central processing unit that sits in a small side pocket of the device. The sensors connect to the processing unit by a custom tubular connector. The unit features a synchronize button and the battery. The device itself has no displaying abilities and has to be paired to a smartphone or a computer to transfer the workout data. These can be then display and interpreted in the provided smartphone, OSX, or Windows application.[11] The processing unit also has three coloured LED diodes that display the status of the device. 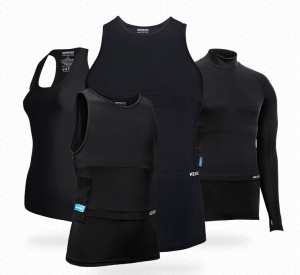 Hexoskin shirt provides feedback on vitals such as health rate, respiration, cadence, calories burned, and sleep quality. The user can gather and store this data for interpretation and thus better their health and training routine.

Hexoskin is developed by a privately held Canadian wearable sensors company Carré Technologies Inc.[12] The company is based in Montréal and was established in 2006.[13]

Enhancement - The device provides a way of measuring and interpreting the data about the user's body. These can be used to improve their fitness and training, or to find out about any health problems.

The user can store and display the gathered data through an online app Hexoskin Dashboard.[14] This means that potentially sensitive data about the user's body is stored online. This may a certain privacy risk if the data is stored insecurely or if the data transmit is intercepted by an attacker.

A number of reviewers were able to try the device. We gathered opinions from three popular technology magazines Engadget (2014), Digital Trends (2015), and Ars Technica (2016).[15]

The article on Engadget praises the app the company provides with the device as being "polished" and "better looking" than in similar products. Although is criticised it for not displaying the information more consistently as the user has to switch between different screens to get to look at all the gathered information. Other point of criticism are the calculations the device makes, here the reviewer says that sometimes the device was prone to errors in its measurements. There are also concerns because of the lack of any social component or coaching possibilities. The final verdict states that the device is excellent at gathering all sorts of data about the body but it is not ready to enter the mainstream market yet.[16]

The Digital Trends reviewed an upgraded version of the device. It praised that the app has social features and allows comparing and sharing the exercise data with others. It mentions that the material the shirt is made of need to get used to first and that it is not as comfortable as other sports apparel the reviewer used, and that is is difficult to sleep while wearing it. It praises that the device is able to provide real-time tracking of the activity. Overall, the reviewer say that Hexoskin is "a great product, capable of accurately tracking an array of biometric data" but ultimately considers the device to be expensive for the average user.[17]

Ars Technica magazine reviewed the device in February 2016. The reviewer noted some issues with syncing the device to their smartphone and the computer, and considered the smartphone app to look outdated. The review praises that the tracking is consistent and the shirt itself comfortable to wear. The criticism was directed towards the lack of any coaching functionality and the lack of possible goals settings. Overall the review states that Hexoskin is comfortable and convenient although it may be expensive for some and that the app needs more development time.[18]

There is no policy regarding this particular device. However, policies relevant to Body-worn wearables may apply to this device too.