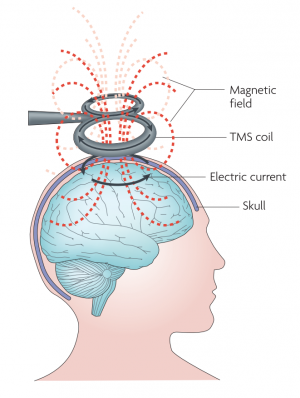 Depiction of how the magnetic field from the coil creates the electric current in the brain.

Transcranial magnetic stimulation, or TMS, is a non-invasive method of brain stimulation. During the procedure, a magnetic coil is placed over the scalp of the person receiving the treatment. The magnetic field penetrates the skull and the electric stimulus activates the neurons in the target area. This can be used to explore how the brain works, by disrupting its normal behaviour with the stimulation, or, in the case of repetitive stimulation, to modulate the brain activity for therapeutic purposes.[1][2] TMS has been used in the treatment of anorexia neurosa with modest results.[3]

Magnetic stimulation is used for mapping the human brain, mainly the primary motor cortex because the reaction of the body to the stimulus is easily observable. This is how the location of brain functions of the brain were localized, first for the motor functions, by measuring the motor evoked potentials in the muscles, and now it is possible to localize cognitive and sensory processes with TMS as well.[4]

It is also used as a treatment for major depression. Two TMS devices, NeuroStar TMS Therapy system from Neuronetics,[5] Inc., and Brainsway Deep TMS system[6] have been approved by the U.S. Food and Drug Administration for the treatment of depression[1] One session usually lasts 30 to 60 minutes.[7] for which TMS is a cost-effective alternative as opposed to antidepressants.[8][4] It has also been found effective in treating migraine.[9] The magnetic field created by the the coil produces electrical current in the brain of the subject due to the electromagnetic induction effect. This produces secondary ionic current which activates the near-surface neuronal axons in the target area. However, TMS, especially in higher intensities, may activate any neuron along the way.[2] The magnetic field can reach up to 2 T and usually lasts for about 100 µm.[4]

TMS system is composed of two parts. A high-voltage charge-discharge component that produces the required current waveform. This is a RLC circuit modified so it produces the waveform with the lowest amount of heat generated. The second components is the current carrying coil that servers as the emitter of the magnetic field. Although the design of the coils vary, the most used are two circular coil in parallel so as they resemble the number eight, or butterfly, shape. The coils are made of copper wiring and enclosed in a plastic chassis, with the diameter ranging from 4 to 9 centimetres.[10][11]

Transcranial magnetic stimulation was traditionally used for brain mapping, especially of the motor cortex. However, it has been demonstrated that it can be used as a therapeutic tool also. It can remedy patients suffering from major depression and help in post-stroke rehabilitation. Other conditions which have been treated by TMS are: dystonia, tinnitus, epilepsy, addiction, Parkinson's disease, Obsessive-compulsive disorder, Tourette’s syndrome, memory dysfunction, chronic pain, sclerosis.

It can also be used to enhance cognitive abilities (memory, motor reaction speed, verbal fluency) in healthy individuals, although the efficacy of these effects are disputed in the literature. 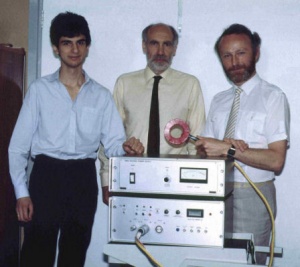 The physical principles behind magnetic field induction generating electrical current in nearby conductors were discovered by Michael Faraday in 1881. The experimentation with the effects of electricity on the human body begun in the 18th century and continued until the beginning of the 20th century. In 1937, electroconvulsive therapy was developed by the Italians Cerletti and Bini. The procedure was originally used to treat schizophrenia but became so popular it was used in virtually every psychological treatment. This resulted in a series of unwanted side-effects and the public stop tolerating the use of the technique. In 1976, the U.S. Food and Drug Administration assumed regulatory control over these types of devices.

Late 1970s saw the creation of the Transcranial direct-current stimulation that was, together with TMS, beginning to be considered for diagnostic and therapeutic purposes among physicians. One of the first papers to utilize TSM was published in 1991.[12] The authors used repetitive TMS to induce speech difficulties in patients while counting. Other study confirmed that TMS can be successfully used in the treatment of depression in 1995.[13] The late 1990s meant wide adoption of TMS into practice, although the treatment was, and in general still is, used as a form of last resort after more established techniques fail.[14] A consensus conference in Italy in 2008 re-evaluated the guidelines for TMS from 1998. In October 2008, the U.S. Food and Drug Administration approved the NeuroStar TMS Therapy system from Neuronetics, Inc. to be used in the industry-sponsored clinical trial of the treatment of medication-refractory depression (FDA approval K061053) through TMS.[15][16]

Therapy & Treatment - Transcranial magnetic stimulation has been successfully used in treatment of major depression and as a recovery aid in patients who suffered stroke. There are several studies that also investigate the use of TMS for treatment of other neurological or psychological disorders.

Enhancement - There is a growing evidence that TMS can enhance cognitive functions in some healthy subjects. This is however investigated only marginally in the literature.

Transcriptional magnetic stimulation does not have a community of enthusiasts as large as the tDCS does. However, the recent approvals from the FDA mean that these devices are soon to be considered safe for treatment of more patients and that means the technology will move closer to the regular consumer. Excluding ethical issues perhaps more relevant to the clinical use of the TMS, i.e. issues such as the need of informed consent of the patient, pre-treatment observations, and long-term effects research, there are other potential ethical concerns TMS, or rather any other brain stimulation technique may pose.[16][17]

This technology can introduce unwanted, although short-lasting, mood changes. It can be used to alter cognition, and in this regard it an be abused by healthy subjects to do so. This may lead to unexpected side-effects, addiction or, in the worst cases, to serious health issues (discussed below). Because brain stimulation replaces the effect of pharmaceuticals, it can be abused as a form cheating or doping while being undetectable by chemical tests (see tDCS entry for more).

While non-invasive, transcranial magnetic stimulation is not without unwanted side-effects. The ability to easily influence the human brain and subsequently the entire body and thus health of the patients raises great concerns about safety and procedure protocol of the technique. The adverse effects of TMS can include but are not limited to inducing seizure, headache, syncope, phosphenes, dysphoria, uncontrollable laughter, speech arrest, scotoma, or skin burns from electrodes (if used).[18] Other minor health concern is the procedure itself. The coil produces a high-intensity 'click' sound when a TMS is turned on, with enough sound pressure to damage hearing.