HoloLens is a self-contained computer that does not need additional connection to other devices. It offers augmented reality in the form of so called “holograms”[5], which are virtual elements embedded into what the user sees through the HoloLens. These holograms are pinned or anchored to real, physical elements in the environment. It also features binaural stereo speakers for providing positional audio. The control is achieved through a built-in sensor array that serves as a natural user interface that can be interacted with with gaze, voice and especially hand gestures.[6]

The display projection does not occupy the entire user’s view but only a small portion, similar to the functioning of other devices of the same category. Nate Ralph, associated editor of CNET, describes the created image as “a holographic field that feels like looking at a 20-inch screen from a few feet away.”[7] Microsoft stated that the image is equal to "looking at a 15-inch monitor that's around two feet from your view"[8] currently (as of January 2016).

HoloLens is strapped to the user’s head and can be further adjusted to better accommodate to the user’s needs. The controls are located above the ears at the top of the device’s frame.[9] 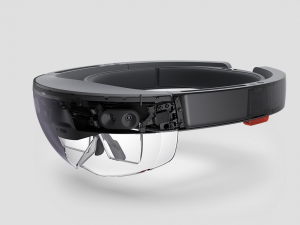 Closer look at the inner workings of HoloLens.

HoloLens features depth camera with a 120x120 degrees FOV, microphone array, stereo speakers capable of binaural audio, an accelerometer, gyroscope and a magnetometer. It also features so called Holographic Processing Unit which is Microsoft’s custom build coprocessor that processes and combines data from all sensors. [9][10] Not much more is officially known about the further specifications of the device. Microsoft does not want to share any details concerning hardware yet. Microsoft forbade anyone to bring any electronic devices to the demo area and so the available information is limited to reviews and guesses.[11][12][13] The device will be released to the developers participating in the Windows Insider program in the US and Canada in the beginning of the year 2016. The price of the developer version is set to 3000 USD.[14]

It is speculated that the main sensor is an advanced version of the Kinect 2.0 camera and that HoloLens might contain several Intel technologies, mainly its Intel Atom Cherry Trail chipset with Intel RealSense gesture control system. The headset is also equipped with four HD and depth cameras as well as an infra-red sensor.[15]

At an event in Tel Aviv, Microsoft's Technical Evangelist Bruce Harris informed that the device will have a battery life spanning from 2.5 to 5.5 hours on average.[8][16]

We envisioned a world where technology could become more personal—where it could adapt to the natural ways we communicate, learn, and create. Where our digital lives would seamlessly connect with real life. The result is the world’s most advanced holographic computing platform, enabled by Windows 10. For the first time ever, Microsoft HoloLens brings high-definition holograms to life in your world, where they integrate with your physical places, spaces, and things. Holograms will improve the way you do things every day, and enable you to do things you’ve never done before.[5] 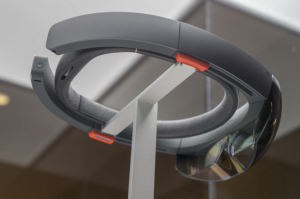 Microsoft HoloLens from below.

There has been no issues noted with Microsoft HoloLens so far specifically. However, some general issues connected to Smartglasses in general still apply.

Enhancement - HoloLens is meant to be used for entertainment and industrial use (3D modelling, collaboration in real-time).

At this stage of the development, the device does not offer any treatment capabilities, although there might be some application running on the device that could offer such features. 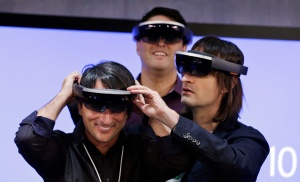 Overall, HoloLens seems to be very well received by the media. Microsoft’s embargo on any detailed technical information leaves a lot for speculation, though. Media outlets wonder mainly about the resolution of the device’s display, as Microsoft never stated an exact resolution, for example.[22] However, the overall enthusiasm for the device is not shared uniformly.[23] According to The Register, HoloLens suffers the same drawbacks as many other similar devices. The projection area is very small and the user has to look directly at the holograms to actually see them.[24] Microsoft stated that while the hardware of the device will indeed improve before the final release, the field of view will change only marginally. In an interview for Verge, the General manager of XBOX Kudo Tsunoda said, that the device will not be capable of full peripheral field of view.[25]

Another common opinion found in the tech media is that with this device Microsoft hopes to renew its popularity as a tech visionary, finally offering new and ‘exciting’ technology.[17] The company will be taking HoloLens on a tour through the United States and Canada to showcase the technology to developers.[26]

There is no legislation concerning the device at the moment. However, some policies regarding Smartglasses may apply.