The Vuzix M100 Smart Glasses is an Android-based wearable computer designed for commercial, professional, and prosumer users. Its pre-installed apps can be used to record and playback still pictures and video, track timed events, manage calendar, link to phone and more, but it is also compatible with existing or custom-created Android apps. M100 can be head-mounted or clipped to either safety glasses (Enterprise version) or regular eyeglass frame (Prosumer version).[8] It is the first commercially available wearable display, in general sale since the end of 2013. Vuzix is currently shipping two types of M100: Enterprise and Prosumer.

As a pioneer in wearable display systems, Vuzix develops Virtual and Augmented Reality headsets and Smart Glasses. Prior to announcing M100 Smart Glasses, the company developed different types of wearable devices, some of them considered to be predecessors of M100, including Raptyr and STAR 1200.

At CES 2011, Vuzix unveiled the Raptyr prototype, a see-through augmented reality display built for consumer market, which won a CES Innovation Award. It featured a 6-megapixel camera, a microphone, headphones, and a motion tracking system. It could be plugged into a PC, smart phone or gaming system, and the lenses would electronically adapt to brighter or darker environments.[9]

On 18 May 2011, Vuzix announced the STAR 1200, a see-through AR-enabled binocular glasses aimed for wide variety of industrial, commercial, defense, and some consumer applications. It was released in August 2011. Currently, the company’s AR projects include WRAP1200 DXAR, M2000AR, and STAR 1200XLD. 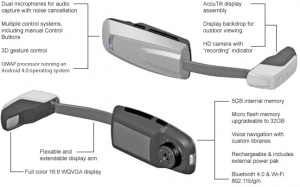 The device features a monocular 16:9 colour display on a flexible, bendable arm, enabling adjustment of its position. The field of view is equivalent to 4-inch mobile device screen seen at 14-inch distance. It has OMAP4430 at 1GHz processor with 1 GB of RAM and 4 GB of internal memory, as well as fully optimized Android ICS (software for compatibility with supporting iOS devices is in development). M100 runs Android 4.0.4 with Vuzix’s own OS 2.0. Its controls include 4 control buttons, gesture control, voice control, and remote control when connected to an Android device. Its audio features include an ear speaker and noise-cancelling microphone, while its camera can shoot 1080p video and 5 megapixel stills. Integrated gyroscope, accelerometer, and compass enable accurate head-tracking. Apart from USB, the device supports WiFi and Bluetooth connection. 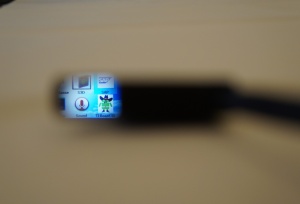 Vuzix Corporation was founded in 1997. It is based in Rochester, New York, with European Office in Oxford, England, and Tokyo Office in Tokyo, Japan. 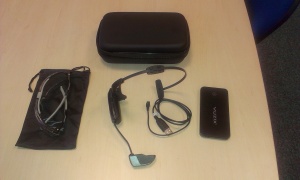 The M100 was officially announced in November 2012. The prototype was first presented at Consumer Electronics Show (CES) 2013.[10]

There has been no issues noted with Vuzix M100 so far specifically. However, some general issues connected to Smartglasses in general still apply.

Enhancement. The device is marketed towards industrial use. It is supposed to help workers to carry out their task more efficiently and hands-free. 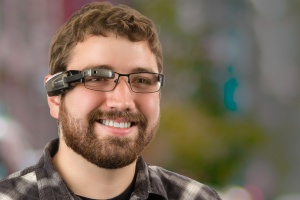 The majority of Vuzix M100 reviews available online rely on the announcements and technical specifications from the manufacturer’s website. Those reviews labelled as "Hands-On with M100"[10][11][12] are written based on the M100 demo at CES 2013 and CES 2014, which was a guided tour through the device’s possibilities rather than the actual use of the device. However, customer reviews on Amazon[13], “hands-on” videos on YouTube by the M100 users[14], and more relevant tech reviews[10][11][15] give a more objective overview of benefits and shortcomings of the device. Common views on M100’s advantages are availability, both on and off-line working mode as a standalone Android device, and potential uses in industry and medicine. As for disadvantages, most commonly listed are difficulties with the setup, short battery life (compensated with the external power pack), and lack of style in its design. However, the new Consumer version, with the embedded new OS 2.0, is aiming towards making the device more user-friendly,acceptable, and potentially more ubiquitous.