The usage of an electrolarynx 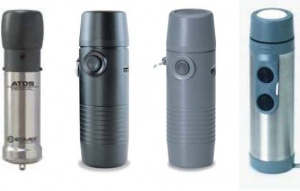 This allows people who have lost either a part or the entire larynx due to cancer to be able to produce speech and to communicate again.

These devices were attached to the tracheostoma of the patient. The device was shaped in such a way that the exhaled air produced a humming noise. It was then carried via a small tube to the inside of the patient's mouth where it served as a base for speech much like the vibrations produced by a modern electrolarynx.[5] TODO: Add picture of pneumatic larynx

The first battery-powered electrolarynx was introduced by the company in 1942.